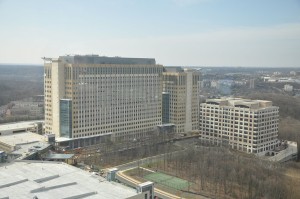 View of the Mark Center Building. – from Wikipedia.org

New commuting options to the Mark Center are available with the opening of the new I-395 high occupancy vehicle (HOV) ramp to Seminary Rd earlier this month from locations in Dale City, Woodbridge, and Lake Ridge. Commuter bus provider PRTC announced today that it will begin a new commuter bus service to the Mark Center, and casual carpooling, called slugging, commenced from the Horner Rd Commuter Lot shortly after the HOV ramp was opened.

Federal employees and contractors assigned to work at the Federal Mark Center Building now have additional commuting options. The new ramp that connects the I-395 HOV lanes with Seminary Rd opened on January 11th, creating a smoother, more efficient connection to the Mark Center, and has enabled casual carpooling and now commuter bus service to commence. 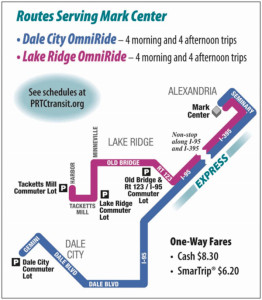 The Potomac and Rappahannock Transportation Commission (PRTC) has been preparing an express bus service to the Mark Center in anticipation of the opening of the I-395 HOV ramp. There are 2 routes, one that travels through Dale City along Dale Blvd and one that starts in Lake Ridge traveling down Old Bridge Rd. The map below from PRTC illustrates the 2 routes. More detailed information including schedules is available on the PRTC web site here. 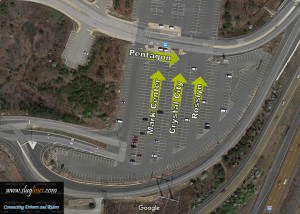 Slugging is an ad hoc form of carpooling or ride-sharing that began back in the DC area in the 1970’s. Slugging is informal, mutually beneficial to the parties involved, and best of all, free-of-charge. Most of the sluglines originate at commuter lots that are also served by PRTC buses, providing an important backup for riders. Since the conversion of HOV lanes to high occupancy toll (HOT) lanes along I-95/I-395 in late 2014, the driver of a vehicle in the HOT lanes with 2 or more passengers (HOV3) can use an E-Z Pass Flex switched to HOV-ON mode that enables use of the HOT lanes toll-free.

The slugline in the Horner Rd Commuter Lot is located in the parking row just East of the Crystal City slugline. See the map on the right for the detailed location.

The evening slugline to return from the Mark Center forms on the North side of the building as noted in the map below. 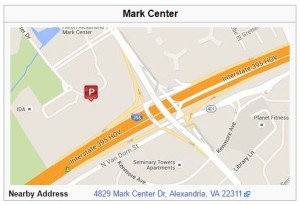 Background: The Mark Center Building, located along I-395 with access to Seminary Rd in Alexandria, VA, was built to consolidate Dept of Defense staff from various locations in Roslyn, Crystal City, and other locations in DC and N. Virginia into a secure, non-commercial facility.  Due to its isolated location from previously existing mass transit, from the opening of the Mark Center in 2011 until this month, there were few commuting options to the Mark Center for Prince William County residents. 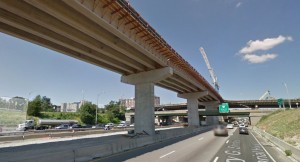 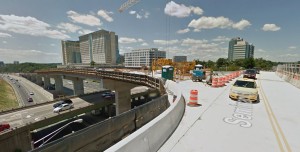