March 15, 2021 Update:  We have  been informed by the City’s Director of Public Works that many of the bollards shown below have been removed.  The City is now installing a single rigid bollard on the trail centerline, with additional bollards placed six feet apart at some locations.  In addition, reflective tape will be installed near the top and the bottom of each bollard.  While these changes significantly reduce the severity of the trail-bollard hazard, the users of these paths will still remain at some risk for serious and permanently debilitating and even fatal injuries from crashing into the remaining bollards.  We urge all public agencies to heed the AASHTO guidance and FHWA recommendation (both cited below) to end the routine use of even single rigid bollards as its default design treatment to discourage motor vehicle incursions on shared-use paths. Using an 18-month process, the City of Manassas will update its Comprehensive Plan–the City’s key policy document for land use, development, preservation and related economic and social issues.  As part of that update, the City will also develop its first Transportation Master Plan to guide future transportation investments and improve mobility in the City.  This is an exciting time for City residents as the Manassas community envisions its future!

Citizen input in updating the Comprehensive Plan is vital to a more livable Manassas.  Throughout the summer and fall, the City will host a second round of Community Conversations on key topic areas, like land use and transportation.  These conversations began on June 19th with a visioning session on land use.  Additional meetings are scheduled throughout the summer and fall.  City Staff will also be available to meet with neighborhood and community organizations to gather feedback. Please contact 703-257-8223 for more information about hosting a meeting.

View coverage of the Community Conversations Kick Off meeting:

The City of Manassas is Poised to Revamp Grant Ave with the City’s First Road Diet, Citing Pedestrian Safety Concerns

The City of Manassas is in the planning stages of a redesign of Grant Avenue, a road considered the southern gateway to downtown Manassas. Citing pedestrian safety and safe routes to schools, City staff are considering a road diet from 4 to 3 lanes with improved pedestrian sidewalks and crossings. A public meeting was held on 29 June with additional public engagement in the planning process to come in the future. Implementation of the Grant Ave Streetscape Project will also enable the city to move forward with smart growth re-development on the southern side of the city.

At the public meeting on 29 June, there was considerable staff, consultant, and community support for implementing a four-lane to three-lane road diet to improve walking and bicycling conditions, enhance bus stops, and increase aesthetics without significantly degrading motoring. Mayor Parrish, three current City Council members, and senior City staff were present at the meeting. 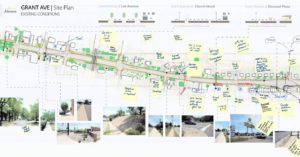 At the meeting, staff guided interested individuals in using the Streetmix computer program to design alternative cross sections for Grant Ave.  While conventional bike lanes are eminently feasible and should be adequate for many bike riders with a road diet’s traffic-calming influence and a lowered 25 MPH speed limit, it was clear that the current street right of way is constrained, and expanding the sidewalk areas to include planting strips with street trees, urban street lamps, and bus shelters is an important “competing” priority that may preclude adding buffered or separated bicycle lanes.

While a simple road diet can often be accomplished using only maintenance funds to repave and re-paint the new lane configuration, expanding the sidewalks and planting strips, undergrounding the currently overhead utilities, and adding bus shelters, urban street lights, street furniture, trees, and other landscaping along Grant Ave will necessitate considerable construction funds.

The Initial planning and design for the project has been funded, but there’s not yet any funding allocated for construction, and thanks to HB 2 and HB 599, which target road capacity expansions, neither the Virginia Commonwealth Transportation Board (CTB) nor the Northern Virginia Transportation Authority (NVTA) are likely to provide any money for a road diet.  If construction will be locally funded, it’s unlikely that the curbs will be moved, so as to greatly reduce construction costs.  At the meeting, Active Prince William advocated for alternatives–including buffered bike lanes–that could fit within the existing roadway. 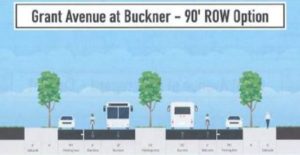 For more information, visit the City’s project page [http://www.manassascity.org/grantave], where you can sign up for project updates, and view the meeting presentation which provides background information and describes how the meeting was conducted.